All you need to know about HIV

Human immunodeficiency virus, which is widely known as HIV, is the virus that causes AIDS (acquired immunodeficiency syndrome). AIDS is a serious, life-threatening illness with a variety of symptoms. Since there is no cure for HIV infection, it can be treated with medications to make patients feel better and to prolong life (1).

There were approximately 38 million people worldwide with HIV/AIDS in 2019. More than 36 million were adults and almost 1.8 million were children. Most people with HIV are in low- and middle-income countries (2).

In 2017 HIV prevalence (the proportion of all people in Australia who are living with HIV), was estimated to be 0.14%, which is low compared with other relevant high‑income and Asia‑Pacific countries.

Ways of infection with HIV

Although people nowadays are more informed about HIV, there is still a misconception in part of the society that if you touch an infected person or contact surfaces like toilet seats you might get HIV which is not true at all. Additionally, HIV infection is not transmitted through saliva.

Here are the ways that you might get infected with HIV:

Women with HIV infection can transmit the virus to their babies during pregnancy, at the time of birth, or through breastfeeding (4). 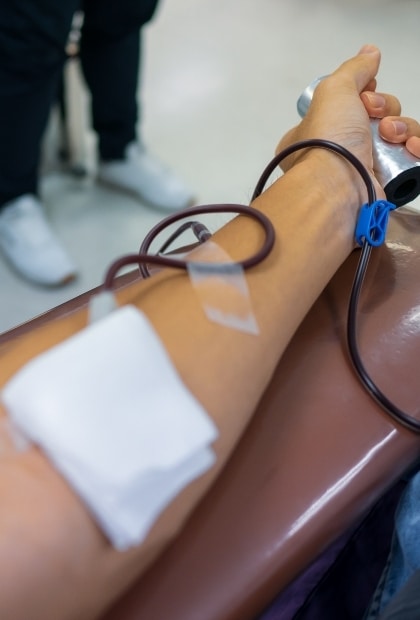 Are you at risk for HIV?

There are some specific categories of people who are at greater risk of HIV infection:

Many people with HIV infection may not feel sick for a long time which is called asymptomatic infection and can be asymptomatic for several years following infection.

Acute infection can be noticed in about 2/3 of the infected people. It is characterized by symptoms including fever, rash, lymphadenopathy, pharyngitis, myalgia, diarrhoea, about 2 weeks after exposure.

As the infection progressively weakens the immune system, they can develop other signs and symptoms, such as swollen lymph nodes, weight loss, fever, diarrhoea and cough (7).

In case HIV is untreated, severe illnesses may develop including severe bacterial infections, tuberculosis, cryptococcal meningitis, and cancers such as Kaposi’s sarcoma and lymphomas (5).

HIV can be diagnosed through rapid diagnostic tests that provide same-day results. This greatly facilitates early diagnosis and linkage with treatment and care. Despite the fact of widely available HIV self-tests, no single test can provide a full HIV diagnosis; confirmatory testing is required, conducted by a qualified and trained health or community worker at a community centre or clinic (5).

Most widely used HIV diagnostic tests detect antibodies produced by the infected person’s immune system as a response against the HIV infection. Usually, people develop antibodies to HIV within 28 days of infection. During this time, people experience the so-called “window” period –  when HIV antibodies haven’t been produced in high enough levels to be detected by standard tests and when they may have had no signs of HIV infection, but also when they may transmit HIV to others. Following a positive diagnosis, people should be retested before they are enrolled in treatment and care to rule out any potential testing or reporting error (5).

HIV can be suppressed by treatment regimens composed by a combination of 3 or more antiretroviral therapy drugs. HIV infection is not cured by current antiretroviral therapy. However, this therapy highly suppresses viral replication within a person’s body and allows an individual’s immune system recovery to strengthen and regain the capacity to fight off infections. Since 2016, WHO recommended that all people living with HIV be provided with lifelong antiretroviral therapy, including children, adolescents and adults, and pregnant and breastfeeding women, regardless of clinical status. The current HIV treatment guidelines include new antiretroviral options with better tolerability and higher efficacy. In 2019, WHO recommended the use of dolutegravir-based or low-dose efavirenz for first-line therapy (5).

IMPORTANT: If you believe you may have been exposed to HIV in the last 72 hours do not proceed with a normal STI test, visit a doctor, hospital or specialty clinic ASAP so you can receive preventative post-exposure treatment (PEP).

It can take up to 12 weeks for the HIV antibodies to show up in your system so if you believe you may have been exposed to HIV and are outside of the 72 hour window, but within the 12 week window period, you can and should get tested immediately, but it’s important that you return or seek further medical advice after the 12 week window has passed to be tested again to be sure.

If you believe you may have been exposed to HIV and are distressed visit our Resources section where you will find the contact information for several Sexual Health info lines operating across Australia, they’ll be able to speak to you about your concerns and help you get the attention you need.

We all know that HIV (Human Immunodeficiency Virus) is serious. If you’ve never really read much about this condition, it attacks the immune system using its cells to reproduce itself and weakening it over time eventually resulting in Acquired Immune Deficiency Syndrome or as it’s less formally known AIDS.

Early detection is our best weapon against HIV and is one of the key reasons Stigma Health is trying to make the process of getting tested much easier and less unnerving. With effective, early treatment, people can manage HIV and live long productive lives; however, you need to know you have it for this to start!

When you visit the Pathology Centre your Stigma Health referral will allow you to get a simple blood test that will be examined for HIV antibodies, which are found in the blood of anyone infected with the virus. If this is more than just a routine test for you or your partner, it is extremely important that you do not engage in any sexual activity until you have the results and know that you are both safe.

There is sadly still no cure for HIV, however taking the prescribed antiretroviral drugs can keep virus replication suppressed, and prevent the progression from HIV to AIDS.

We repeat: It is possible to live a long and fulfilling life with HIV, but early detection and treatment is vital.

Get a Syphilis Test now!